From the Outside Looking in

by Quixotic and The Human Experience 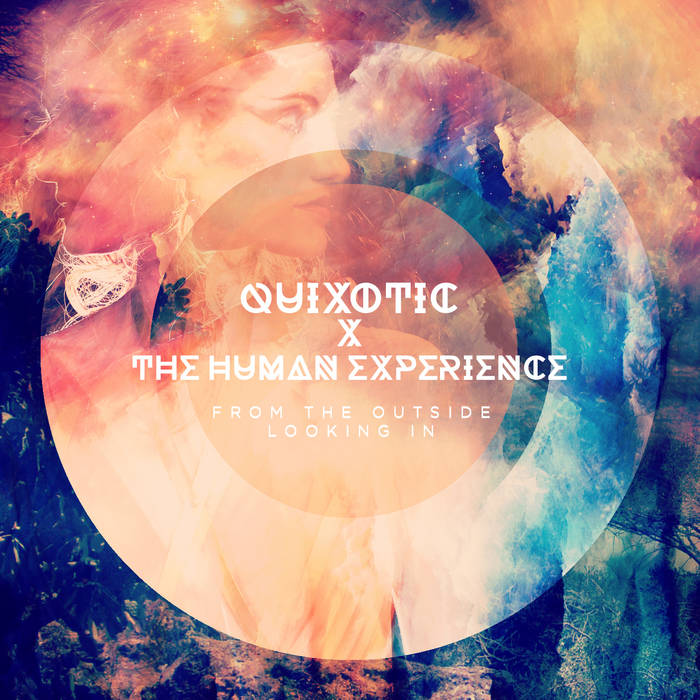 Helix Wow! Such a good smooth chill album. I loved Grandma's haunting Piano, and the beats in Ot Du Shi are dope. From the Outside Looking In and Fire Inside are also very solid tracks. This is a very tasty album. Thanks! Favorite track: Grandma's Piano.

The collaboration between Quixotic and The Human Experience expands beyond the sonic experience and into the mixed media world. Quixotic blends world class music with performance art, using cutting edge visual projections with aerial, dance, and fire ballet to convey mysterious and beautiful worlds. On this release, Quixotic's own live band collaborated with David Block's cinematic compositions to create a synesthetic explosion on the senses.

Over the course of two years, Block worked with Shane Borth (Violin/Viola) and Anthony Magliano (Hang Drum/Percussion), sending files back and forth, receiving direction from Borth and Magliano as to what kind of musical landscapes they were envisioning for the performance. Finally, "From The Outside Looking In" was born.

The album weaves together sounds from around the world. Listeners can expect a palette of sensual, global, organic-electronica, fit for one of the most mesmerizing performances on earth.

Art that enchants, invigorates, and awakens the imagination has always been born of the rule breakers, and no one is breaking the rules more joyously, more fervently, than Kansas City’s own Quixotic. A melting pot of dance, aerial acrobatics, projection mapping, high fashion, and original live music, Quixotic is a cornucopia of mystical majesty that enraptures audiences who have never even dreamed a night at the theater could be so much fun. Sleek dancers pushing the boundaries of athletic artistry soar across neon skies that encompass and envelop traditional and non-traditional venues, bathing structures and painting new nature on old, in a vivid fantasy world. Evocative tribal electronica sets the stage for the visual panoply of color and agility in flight. Even the aural accompaniment blurs the lines between stylistic worlds, blending organic instrumentations of lush strings and primal drums with digital symphonies of programmed beats and bellowing subsonic frequencies.

Founded in 2005 by renowned graphic designer, percussionist, and artistic director Anthony Magliano, and joined a year later by award-winning lighting and theater technology guru Mica Thomas, Quixotic’s mission statement was to tear down the walls that cloistered each discipline of the arts, unleashing a flood of new ideas that would wash away the staid norms of traditional theatre performance. It is the joint vision of Magliano and Thomas that has taken the loose collective of avant garde trendsetters and molded them into what the New York Times branded an “innovative circus [company].” This ultra-modern, multi-sensory experience shatters antiquated notions of “a night at the ballet.”

The stunning and surreal environments that set the scene for this experimental movement troupe has aligned its performers with the most progressive acts in the electronic music scene (Dave Tipper and Shpongle, among others), but its undeniable grace, transcendent athleticism, and dogmatic dedication to haute couture also allows Quixotic to flawlessly complement the Kansas City Symphony.

The raw power, immersive experience, and sheer mesmerizing artistry of Quixotic Fusion cannot be conveyed through words, nor can audio or video alone capture the magic of an intense, firsthand glimpse of the collective in action. To truly get a sense of what it is to leave the earthly realm and enter a digital landscape of breathtaking wonder, where the bounds of genre—and gravity—have no meaning; you have to be there to believe it.

David has shared the stage
with renowned artists such as, Thievery Corporation, Bonobo, Tipper,
Random Rab, Emancipator, Bluetech, and many more.

Bandcamp Daily  your guide to the world of Bandcamp